The Green City of Benguerir

AN ECONOMIC , SOCIAL AND CULTURAL AMBITION ; 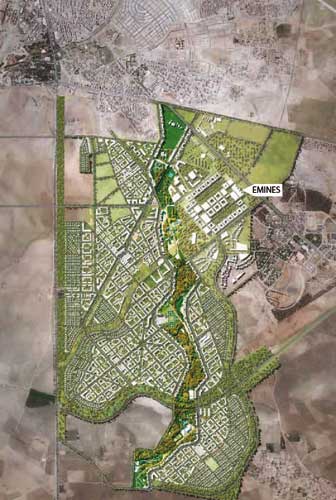 Launched in 2009 by His Majesty King Mohammed VI, as part of OCP Group's major development projects, the Mohammed VI Green City aims to become a world-class university hub. Its vocation is to offer an attractive and ecologically exemplary living environment around a knowledge ecosystem.

The Mohammed VI Green City is positioned as a new city, with dimensions both local and national.

At the local level, because of its size, its consistency, its investment volume, its attractiveness and its duration, the project has a remarkable urban, economic and social impact on the adjacent city of Benguerir.

Moreover, given the design and ambition attached to the Mohammed VI Polytechnic University, which is the heart of the new city, this project also carries a national dimension. Indeed, the university is expected to play a major role in the success of the strategy of the pact for the industrial emergence of the kingdom, through its contribution to training and research.